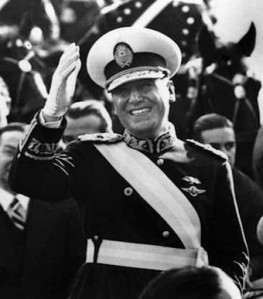 Argentina has lurched closer to becoming what could be described as a Fascist nation after “Peronist” president Cristina Fernández de Kirchner announced the nation’s intentions to nationalize the largest oil company in the country yesterday.

Combined with rabble rousing rhetoric dredging up the impotent claim to the Falkland Islands, and a tightened control of the press, many fear leadership in Argentina has finally dropped all pretenses of a being democratic and free market nation, as they appear to be hurtling the nation towards populist policies which arguably wrecked the entire continent of Europe during WWII.

Cristina’s party controls the government, so there is little hope that the bill to nationalize the oil company will fail in Congress. The move would mean the nationalization of YPF which is the largest oil and gas company in the resource rich nation.

Over the past decade, experts have expressed concern about the viability of the nation’s industry as restrictions, regulations, and taxes (which have been implemented under the guise of redistributing wealth) have subsequently stifled any motivation to develop the country’s energy sources. Ironically, those selfsame regulations, taxes, and restrictions have largely been the cause of higher prices, and inefficiencies cited as justification for the government seizure of property.

Despite being home to exceptional resources, the country has resorted in recent years to unilaterally ending energy exchanges with neighbors, as it has done with energy-poor Chile in the middle of winter.

At the end of the 19th century, Argentina had been one of the richest nations in the world due to a prospering free market.

Starting in 1945, the 10 year administration of Juan Perón began nationalizing industries and services which were previously run by private interests. the government took center stage, and controlled the previously natural impulses of the economy. Rampant inflation followed these fascist policies. Growth from the 1960s was undercut by the corrupt and disorganized economic policies during the military dictatorship from 1976 to 1983. In 2002, Argentina defaulted on its debt; no longer able to make interest payments.

In 1991, Argentina privatized many government owned companies, and YPF was sold for US$3 billion during July of 1993.

It remains to be seen how European governments react to the nation effectively confiscating the property of the citizens of foreign nations (58,23% is owned by the Spanish energy company).

Stock shares of YPF SA dropped over 11% after the move was announced on Monday.

10 thoughts on “Lurching Toward Fascism in Argentina”