If one were to attempt a word association exercise starting with “Cuba,” it is very unlikely that “profits” would often follow, yet the island nation is counting on that unexpected connection to raise tax revenues.

To tax profits, of course, it is first necessary to have commerce, which had heretofore been controlled by the state. Facing the stagnant failure of his brother’s totalitarian experiment in communism, Raúl Castro, began implementing incremental market reforms for the impoverished nation after succeeding Fidel as president in 2008. 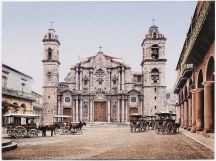 Unfortunately, his reforms were limited, and restricted. Largely limited to areas of commerce which would typically be perceived as basic rights in the developed world, he gave citizens the right to own their own home, buy newer cars, and access cell phones, effectively trying to modernize one of the few Marxist enclaves left in the world.

Cuba’s aim to squeeze potential tax revenue, from mutually beneficial exchanges in a market, belies the underlying driver of these market reforms. Cuba has struggled to finance its welfare state, since the collapse of the Soviet Union, which had enthusiastically supported the nation as an ideological ally in the Western Hemisphere. Today, the socialist government in Venezuela provides energy to Cuba, but in 2010, even Fidel Castro agreed to begin reforms, as the Soviet model of centralized planning was not sustainable for the country, purportedly admitting that, “the Cuban model doesn’t even work for [Cuba] anymore.”1

To facilitate this imposition, the government has now released its first comprehensive tax code since the revolution in 1959.

Of course, since Cuba has been a socialist country for the past fifty years, it is, effectively, simply lowering its tax rate from 100% to encourage growth.

Meisi Bolanos, Cuba’s Minister of Finance and Prices, stated that “the legislation took into account the experiences of countries such as China, Vietnam, Venezuela, Brazil, Spain and Mexico, though it was conceived in tune with the particularities and conditions of Cuba.”

An estimated 10% of Cuba’s population is believed to have left the country for the United States, many crossing the open sea in rafts to escape Fidel Castro’s regime. Average monthly salaries sit at an abysmal $25 a month. Far lower than the $7,643 GDP per capita for Central America, and even further below the $11,586 per capita income for all of Latin America and the Caribbean.

It is expected that a massive influx of investments from Cuban expats would follow any serious market reforms.

One thought on “Cuba to Begin Taxing Profits”