According to the Madrid based Spanish daily newspaper ABC, exit polling showed opposition candidate Henrique Capriles with a lead of 51.3% over incumbent Hugo Chávez’s 48.06% with an hour left to vote during Sunday’s presidential election in Venezuela. [1] Other reports before the election showed Capriles with a strong lead. [2]

Official reports listed Chávez at 54.4% of the votes, compared to 44% for Capriles’ opposition party by the end of the day.

Hugo Chávez closed Venezuela’s Miami consulate just before the election preventing many Venezuelans from voting. [3] Miami is home to many Venezuelan expatriates.

It appears that there cannot be any recounts, as Venezuela uses electronic voting.

After the election Sunday night, it appears that Chávez deployed tanks into the streets of Venezuela. There were concerns about violence during this election, as many doubted Hugo Chavez would relinquish power. Twitter user Arturo G. Villarroya commented on the action, saying, “Chávez brought tanks into the streets. Why? Nothing good can come of this…” 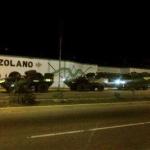